This week - A Summary

I can't promise to be as eloquent as my Lowell. (A plug here: Go check out his blog. He recaps the details of our family life a LOT better than I do.)

It has been a rather productive week.

I finally got back into doing some sewing. It started because I wanted to resize a t-shirt. Here's a pic of the original shirt: 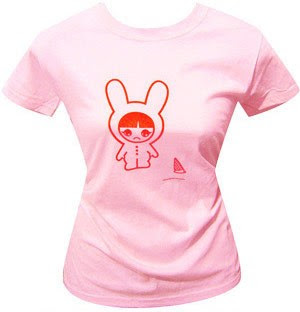 Unlike the picture, it's NOT fitted at all. It fits more like a regular old standard t-shirt. Consequently, when I wear it, I look frumpy, dumpy and shapeless.

I thought resizing it would be easy. I won't go into the boring details of why one of my favorite t-shirts will now likely be made into a pillow or something. Suffice to say that I blew it beyond repair. If I get ambitious, I might try to make a princess-line tank out of it, using the front graphic-section for the center-piece and contrasting color for the side-panels and sleeves. :( It was a learning experience though, so the project wasn't a total loss.

I'm now in the process of making a denim skirt. Here's a line-drawing: 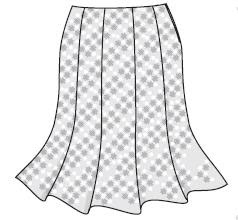 I'm making it out of this funky stretch denim that's black on one side and red on the other.

I'm sewing it so that the raw edges are on the outside. The main body of the skirt will be black with the raw edges (once frayed) showing up red.

So far it's sewn up, but I need to do some major fitting at the waist. It fits at the hips, but is way loose at the waist.

Kid-wise, my munchkins have been experiencing some success at some projects of their own.

Tasia blew us away this week by insisting on reading the bedtime story to us instead of us reading it to her. So far she's read us 'The Cat in the Hat' and 'The Tale of Three Trees'. I'm amazed not only that she can read those books, but that she reads smoothly and with expression. I've known for a while that she's been teaching herself to read, but had no idea how far along she'd gotten. She tends to prefer not to show any new skills she's learning until she feels she has some level of mastery over it. This is yet another one of those things that reminds me how much of a little duck she is. Serene on the surface, but paddling like mad underneath. What else is going on in that little head of hers?


Katiana's begun potty-training. We're on day four and have been making more progress each day. It's so cute to see how proud she is when she succeeds.

And my Lowell's been sick. He got that nasty flu bug that's been going around. The worst of it, though, is that now he's feeling better, but can't sleep at night because of a wicked dry cough. The only way he can get decent sleep is by sitting up on the couch. This has been going on for three nights now. The poor guy is absolutely exhausted. :(

So there you have it.
Labels: family