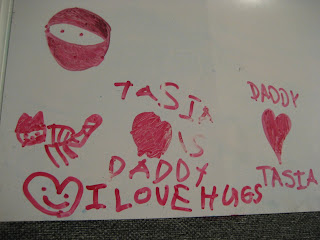 There's an unspoken, unwritten rule in our house: The whiteboard in the kitchen can never be empty nor can it be used only for such boring necessities as shopping lists.

I think Lowell started it. He wrote "Daddy loves Tasia." By the next morning there was a return message from Tasia, "Tasia loves Daddy."

Ever since then whenever the whiteboard is completely erased it's a guarantee that by the next morning there will be a love message from Tasia.

From the looks of this most recent picture she's expanded her message to include requests and the occasional picture of a cat.

The picture of the ninja face is mine. Did you know I want to be a ninja when I grow up? From the looks of it the cat wants to as well.

Back to the white board. 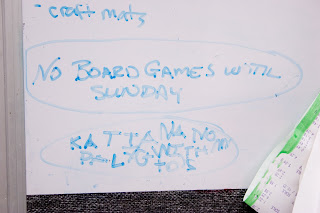 Regrettably, it's not always used for messages of love. One week I had to lay down the law regarding board games (hence the circled message on top). I won't bore you with the details.

By the next morning, Tasia had added her own rule for her sister. You may have to click on the picture to enlarge it to see the message. She hasn't started school yet and hasn't learned about spaces.

It says, "KATIANA NO PALYG (playing) WITH MY TOYS."