‘Scuse me while I go nerd for a bit

Many of  you know that I’m rather fond of gaming.  We own some version of every current gen console, including the handhelds for a reason.

That reason is me.

I wouldn’t consider myself a hardcore gamer.  Especially now that I’m a parent.  That and the fact that most racing, first person shooters and action-adventure games give me serious vertigo.  Yes, it is possible to get motion sickness without leaving one’s living room.

I’m losing patience with regular rpgs and I can’t figure out if it’s because I’ve been playing them long enough to get bored with their conventions or if this generation’s rpgs are actually that mediocre.

Case in point: I love the Final Fantasy numbered series of games.  Final Fantasy VIII is still my all time favorite game (closely followed by Legend of Zelda Ocarina of Time – but I digress…)  Final Fantasy IX was the reason I bought my first Playstation.  The series is known for its high production value, and has a dedicated fan following.

I am one of them.

Needless to say, I’ve been anticipating the release of Final Fantasy XIII for the Playstation 3 since I first heard about its release more than 4 years ago. 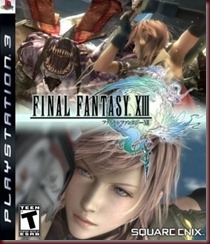 After playing it for a week, I think it’s the most beautiful game that I’ve ever not cared to finish.  The production value is absolutely stunning.   I feel like I should love it, have tried so hard to love it but just can’t.  Why?

I think I’ve narrowed it down to two possible reasons:

1.  I really don’t care about the characters or their world.  A compelling story is the central element of any Final Fantasy game – any rpg really.  If, at this point, every single character died and their world blew up and the game started with new ones mid-game I’d think it was an improvement.

2.  The gameplay is beyond boring.  Rpg haters have claimed for ages that rpgs require no gaming skill because all you have to do is hit x.  I disagree in general, but for this game it’s absolutely true.  All the grinding without the fun.

I think I’m going to take a break from it and play something different for a while.  Maybe when I come back to it, I’ll feel differently – but I somehow doubt it.